Rules: Going completely vegan for a whole week, NO EXCEPTIONS.

Sounds pretty easy right? ….. I really wanted to try and see if it is actually possible for me to go vegan, so I thought why not trial it out for one whole week. No meat, fish, dairy or anything that may contain animal products.

Why: I eat vegan pretty regularly anyway but I have never gone the whole way as I am a massive foodie.

We as a planet are becoming over populated and consuming/producing far too much meat than our planet can keep up with. I honestly believe becoming vegan can make a difference to global warming and becoming a sustainable planet.

I am also concerned about the way in which we have lost contact with what is entering our bodies. Feeling good on the inside is the most amazing feeling and a lot of that comes from what we are putting in to our mouths during meal times.

Lets see how this goes…

Breakfast: Half a banana, a green tea before yoga and a bowl of my homemade granola, dates and a cup of tea after.

Snacks: Two apples (I was hungry).

Dinner: Half a pizza, half a veg tagine 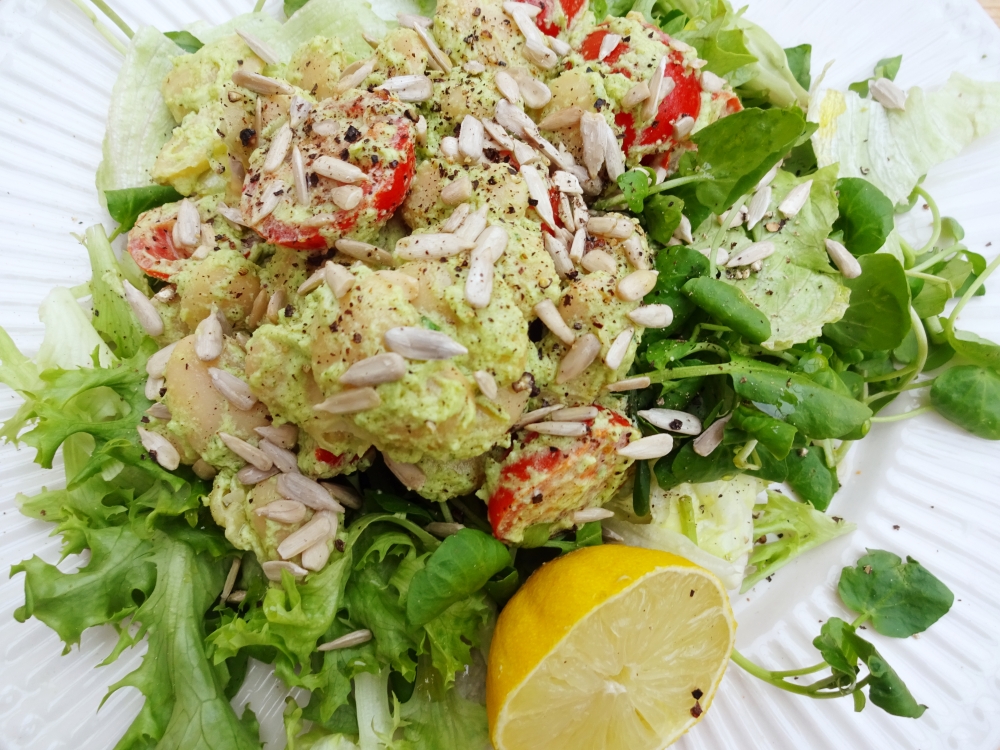 I have substituted cows milk with oat milk to go in my tea.

No dramatic changes for my breakfast or lunch, and oat milk is completely fine in my tea – YAY. Went out for dinner with my two girlfriends and we shared pizza and the tagine, and the pizza was very good even without cheese. We went to see JOY at the cinema and I would usually get chocolate to snack on but felt so much better for not doing so. So far so good.

Lunch: Left over butterbean salad, an apple and a coffee with oat milk.

Again breakfast was pretty standard for me, I was very hungry by lunch and could have killed for a fish finger sandwich but again the salad was nice, I just added some fresh salad leaves and cucumber. I felt like I had a lot of energy in the afternoon, which I put down to eating fresh and nutritious food. For dinner my sister made her dahl and baked aubergine. It was amazing and desert was incredible, being vegan is tasty! 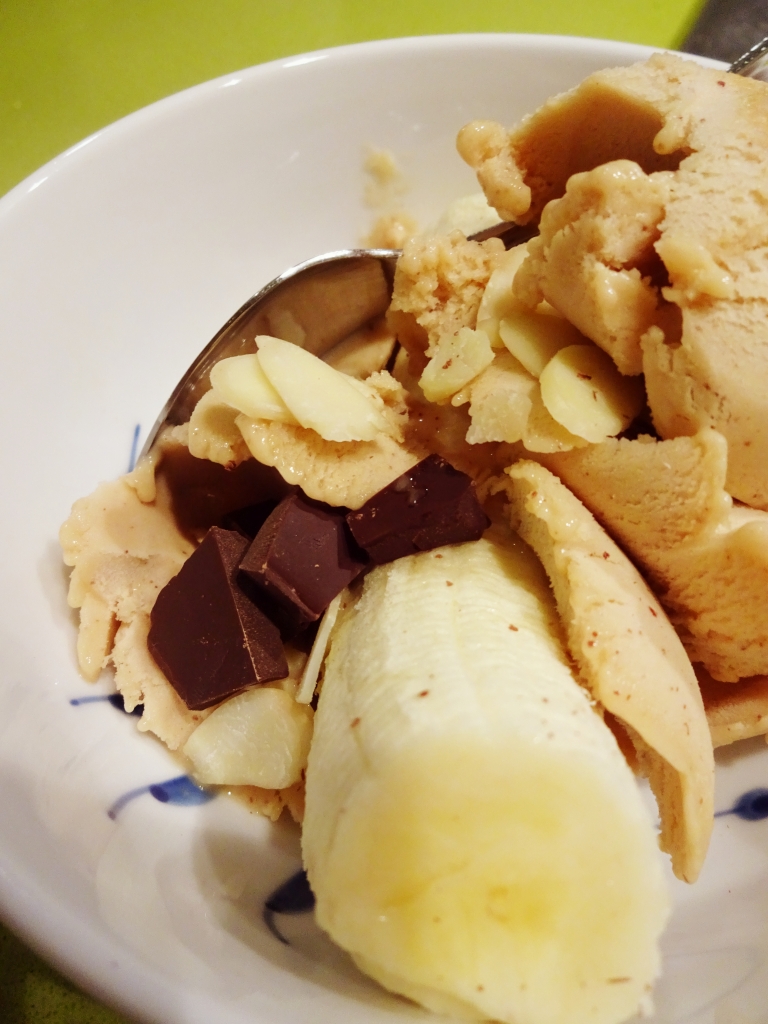 Breakfast: A tea, handful of granola before a run, and porridge after.

Lunch: Pea and basil hummus on rivita, half an avo, one carrot and a coffee.

Deliousllyellas stew is so good, I make this pretty much every week. The pea and basil hummus is one of my sister’s recipes and I will post it on the blog ASAP, everyone needs this in their lives. Update on how I feel, I have a slight headache; pretty sure it is Kinder withdrawals… Breakfast: Granola with half a banana and and a tea

Lunch: Leftover stew with half an avo and an alpro soya yoghurt.

Made dinner with my girlfriends tonight and tried out this simple tomato pasta, which I would definitely recommend. We then celebrated life with a few gin and tonics and some yummy chocolate. Day four and loving the fact that Hendricks is vegan. Feeling as if vegan could be possible! 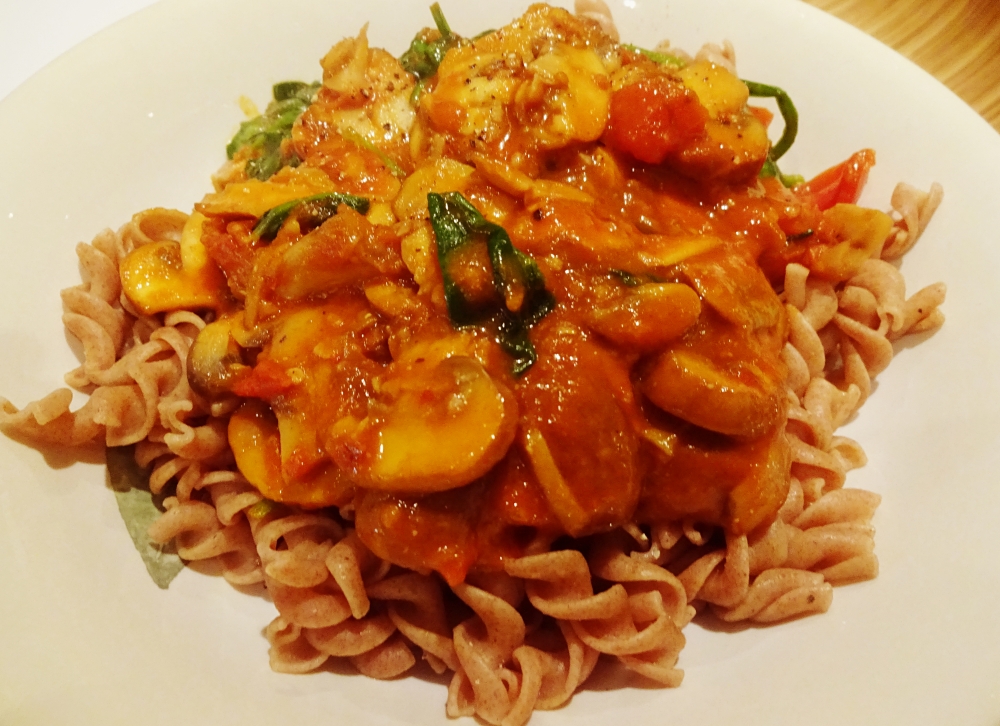 Breakfast: Porridge with almond milk and half a banana.

Snacks: Coffee with oat milk and a hand full of pistachios.

The hardest day so far, being vegan is NOT easy. I felt completely fine as I woke up, fresh and ready for the day, I started to do a HIIT workout and suddenly felt extremely weak. I had half the energy I usually do and my arms were struggling to lift weights. I took sometime out and had a coffee and some nuts. I guessed it was because my body was probably lacking protein. I messaged my vegan friend and she suggested getting a lot of beans into my lunch (hence the beans on toast). Following lunch I felt fit and healthy again. However my day ended up being highly stressful and when it came to dinner I was not feeling up to cooking anything myself and my sister offered me chicken and I cracked. Wooops. One thing I have learnt is that you have to be organised to eat vegan. Also, Oreos are vegan, who would have known!

Brunch: Granola, fruit with coconut yoghurt and a coffee.

Snacks: Cripsy kale and half avocado.

I DID IT. (ish) minus the very naughty chicken situation.

This week has been a lot harder than I thought.

Why not go fully vegan?

I utterly believe in the idea that if you couldn’t kill it yourself then you shouldn’t be eating it. Therefore to me eating sustainable fish and shellfish (e.g. picking my own mussels from the rocks at the beach) or eating local/ my own eggs are fine. In my mind there is no way that this cannot be environmentally friendly and sustainable.

As a yogi it is important to me that the food I ingest it obtained without causing undue harm to the environment or other beings. Traditionally this meant being vegetarian, but I believe eating organically and locally is the future.

From now on I am going to be a lot more conscious about what I put in to my body and where that food has come from.

INSTAGRAM @YOGA.RO
Onwards and upwards in 2021. A year to keep our connections strong and to start to heal from last year. I think it is so important to be supporting our loved ones and our communities as much as is obviously possible right now. We can get through January together. By practising yoga, be eating well, by laughing and playing. Or doing whatever you know makes you feel good! I will be offering my usually studio zoom classes as well as my weekly All Level Flow on Wednesday night and Yin Yoga on Sunday night. Looking forward to seeing you again on screen and to keep sharing this amazing practice with you all. You can book a class via the link in my bio or by checking out my website ✨💛🌞 Picture from my Atlas Mountains retreat in 2019
Thank you thank you thank you. To all who turned up to my first ever Insta live class on the 17th of March, to my last zoom class of 2020, and everything in between. For this year even more than most Yoga as been a saviour. For me practising, as well as me teaching. In march when everything was terrifying and totally unknown I wasn’t sure if I was going to be able to continue teaching yoga. But thanks to you, this incredible community, I managed to keep sharing the magic that this practice can bring. Instagram can be very phoney and fake but I want you to know that this thank you is real and direct from the core of my being. I love you all so much, have a restful holiday break and I can’t wait to keep practising with you all in 2021 ✨✨✨✨✨
The 3 stages of a run 🏃🏻‍♀️😭🚶🏻‍♀️ managed 100km in November and now I am knackered.
Teaching tonight 6:30-7:30pm on Zoom. This is an All Level Class and absolutely everyone is welcome. To join up click the link in my bio 🌊 lets get flowy ⚡️(pic from Kynance last week in the July (November) sun ☀️
🌤🌊🐚 oh my the most magical few days in the south west (probably the last for 2020) Grateful for nature and the ocean for giving me new energy and life ✨ As of now my schedule is staying the same(@theyogaedgeuk just going fully online), join me tomorrow for my first class back. A special Yin Yoga at 6:30-7:30pm on Zoom and hosted by my friend @chloetgsenior This class will be donation based and all the proceeds will go to Breast Cancer UK 💛 to book email Chloe_senior@hotmail.co.uk
Breathing in and breathing out. Taking in nature that’s close to home and enjoying the cool autumn air 🍂 yesterday we did a 10k hike in Kent and it was dreamy ✨
Loading Comments...
Comment
×
%d bloggers like this: